Good Example of a Bad Example

Good Example of a Bad Example

Amy and I had an experience when we were first married in which our nephew was run over by a riding lawnmower and was hospitalized. Through prayers and blessings he survived, but it was tough on him and the family. Any time one of my girls would get on the riding lawnmower I would remind them of our rule.

Fast forward a few years to the end of August 2012. While mowing the front lawn, the mower decided to stop cutting. I pushed the lever so the blade was not engaged but left the mower running on idle. I looked under the mower and noticed that the belt slipped off the pulley. Easy fix, right? I reached under and pulled the belt to slip it over the pulley. When I pulled the belt it engaged the motor and the pulley spun and sliced the tip of my finger open. Ouch! Bad Dad move! I looked at my finger and realized that it was cut a little too deep for me to just put on a band-aid and “rub some dirt on it” and get back to mowing. Three stitches later and a good frowning by Amyster I was back on the lawnmower. (Yes, I turned the mower off, slipped the belt over the pulley and away I went). 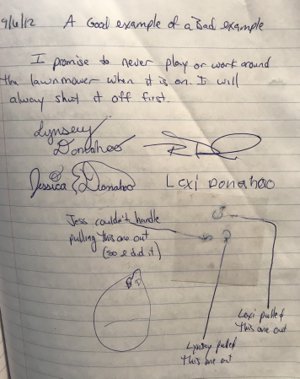